Burger’s Disease, also known as thromboangitis obliterans, is a disease which causes the patient’s limbs to decay due to blood circulation impediment caused blood vessel blocked by flammatory transformation of blood vessels in arms and legs. The name comes from Leo Burger, who reported this disease in 1908. It is characterized by pain during rest, repeated ischemic ulcer and gangrene at the tips of hands and feet. It is only diagnosed by its clinical symptoms. Its cause and mechanism has not been revealed. However, in many of the cases, smoking is shown to be closely related to occurrence and progress of the disease.

The most common initial symptom is claudication at the hands and feet (pain caused by improper blood flow supply during movement), or severe pain at lower arms or legs during rest. As the disease progresses, the skin at the arms and legs affected by occlusion shows athropia, accompanied by ischemic ulcer, numbness and loss of sense. If the disease further progresses, tissue necrosis may occur at the affected arms or legs.

The only provided way to stop the progress of the disease and avoid amputation is to completely quit smoking. However, even if the patient quits smoking, stringhaltedness, Raynaud’s phenomenon and other symptoms may continue. Other treatments include the use of prostaglandin derivative which relaxes smooth muscle cells within blood vessels and inhibit their proliferation, and inhibits platelet aggregation to prevent thrombosis. This medicine, however, is known to cause side effects such as coldness, nausea, headache and diarrhea.

Other medications include vasodilator and anti-inflammatory drug, but none of them offer fundamental cure for Burger’s disease. As for surgery, one possible way is to bypass surgery which connects this side of the clogged blood vessel to the other side using the patient’s blood vessel to resume the clogged blood flow. However, bypass surgery is not applicable to Burger’s disease because the disease progresses from terminal vessels. When all of these treatments fail, there is no option left but to amputate the affected area. 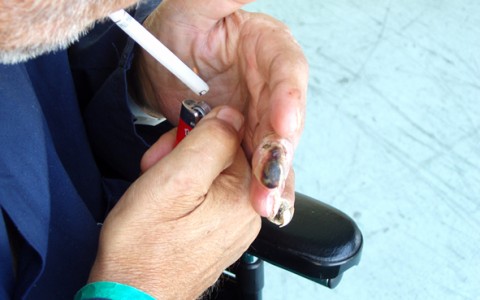 The name VascoStem comes from Vascularization and Stem Cell. It is a candidate for a new drug that improves or treats ischemic ulcer, etc. caused by Burger’s disease. VascoStem, once injected, indirectly vascularizes through the vascular endothelial cell growth factor (VEGF) secreted from VascoStem, and directly restores the damaged tissue.

According to the Phase I/II clinical study plan approved by the Korean Food and Drug Administration, the safety and clinical efficacy of 6 weeks after Vascostem was evaluated in patients with the disease of the Berger disease at Seoul St. Mary’s Hospital and Seoul National University Hospital Boramae Hospital. As a result of administration of VascoSteam in patients with Berger disease, no adverse event or serious adverse drug reaction were found in all the patients participating during the study, and safety and tolerability were confirmed. In addition, we were able to confirm effectiveness in most effectiveness evaluation items such as treadmill walking distance and pain reduction. These results were published in the International Journal of Cell Medicine in October, 2016, and it has been internationally proven that VascoStem is free from adverse reactions and side effects to patients with severe buerger disease.

© Copyright 2017 Biostar stem cell Research and Development All rights reserved
Do NOT follow this link or you will be banned from the site! Scroll